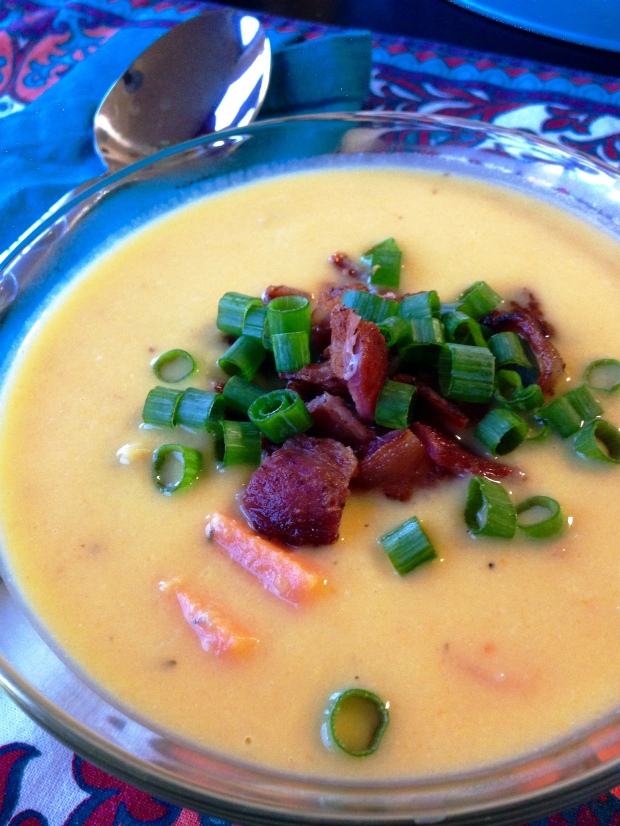 I’ve been looking for a satisfactory clam chowder replacement since we started paleo about a year ago.  I’m not going to say this is a dead ringer, but it’s close.  It’s just as creamy, just a little sweeter, and doesn’t leave you with that icky bloated feeling.  It’s not quite as rich as regular clam chowder, but in this case, that’s a good thing.  I found a recipe for the few base ingredients for this and just started dumping stuff in after that.  All things considered, it turned out fantastic.  Even Isak ate all of his (he’s going through this typical toddler phase where he only wants to eat macaroni and cheese, chicken nuggets, cookies, and popsicles, so him eating this makes me ecstatic!).

This takes a little longer than some of my other soups, but it’s definitely worth it.  From start to finish it took me about an hour, so we’re not talking a full-day commitment or anything…but it is longer than heating up a can of Campbell’s.  Then again, most things worth eating take longer than a two-minute nuke in the microwave.

1.- In a large pot, cover sweet potatoes and cauliflower with water.  Bring to boil and cook 20-25 minutes, or until tender but not mushy.  Drain and set sweet potatoes aside in a separate bowl.

3.- In a medium skillet over medium-high heat, cook mushrooms (in a dry pan) until browned and softening.  Set aside.

4.- Cut sweet potatoes into small chunks.  Transfer half of the sweet potatoes into the soup pot.  Using immersion blender (or a regular blender), blend the soup until smooth.  Return to cooking over medium heat.  Stir in 3 cans of clams, remaining sweet potatoes, mushrooms, and reserved bacon drippings.  Taste and adjust seasonings if needed.