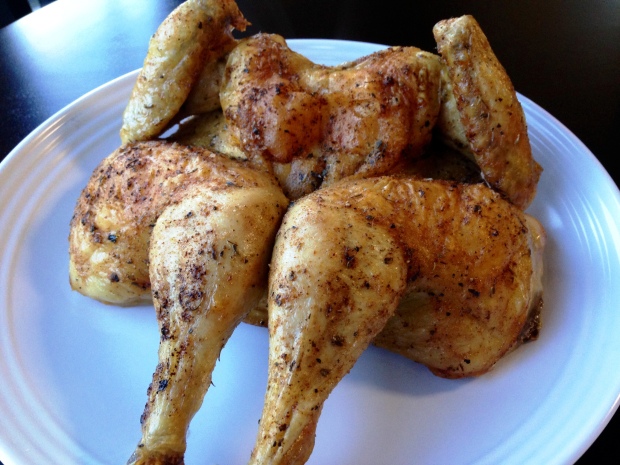 Isn’t this the most modest-looking chicken you’ve ever seen?  I sent this picture (or versions of it) to a handful of people and at least three of them commented on her modesty (it’s obviously a female…one, based on sheer odds, and two…she’s just so classy).  But seriously, she’s all modest looking because after I spatchcocked her, the only pan I had clean was pretty much the exact same size as the chicken…so the chicken kind of pulled in from the sides of the pan.  Oh well, it tasted DELICIOUS.

Anyway, this is the first time I’ve had pastured chicken.  We got it from the new farm we’re working with, the amazing HANSON FAMILY FARM.  Um…so it tastes only vaguely like the chicken from the grocery store.  It’s awesome.  I decided with this chicken, I was going to learn to spatchcock.  That is a funny word for “make the chicken lay flat.”  If you don’t know how to do that, there are something like a gabillion videos on YouTube that will teach you how.  After a quick search, this one looks pretty good:

I would take pictures of the whole process, but we have a tiny kitchen that doesn’t have any good surfaces for even remotely decent quality pictures…so I decided against posting those.

1 tsp Archer Farms House Blend (this is a spice blend that is marjoram, fennel, thyme, cilantro, ginger, anise seed, sea salt, garlic, onion, and ground mustard–if you don’t want this, just throw some spices together that you enjoy)

1.- Preheat oven to 425.  Spatchcock the chicken and place skin-side down in a baking or roasting pan.

2.- In a small bowl, mix melted Kerrygold (or oil), garlic, and spices into a paste.  Rub some of this into the cavity side of the chicken.  Flip chicken and rub the rest into the skin (and underneath the skin if you want to).

3.- Put pan in oven and roast for 30-45 minutes (until the internal temperature reaches 165).  I used a 3-pound chicken and it took barely over 30 minutes to fully cook.

4.- Remove from oven and let the chicken rest for at least 10 minutes before cutting and serving (I let mine rest for 20 minutes or so while I was taking pictures).

5.- Devour the chicken like a caveman who hasn’t seen meat in six months.  Bonus points for grunting while you gnaw it off the bone.