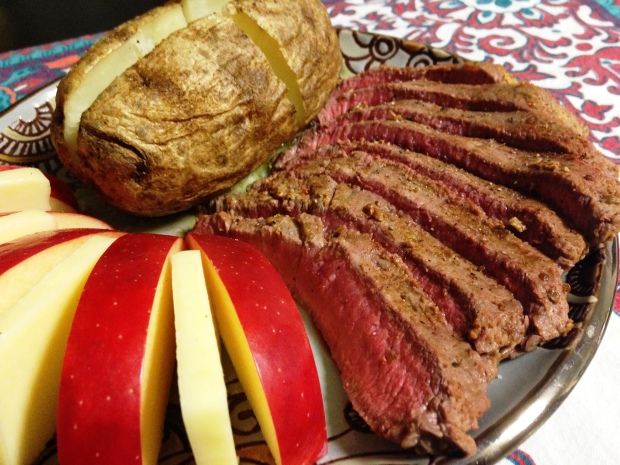 If you guys don’t have a T-FAL OPTIGRILL yet, you are seriously missing out.  It’s similar to a George Foreman in that it’s an indoor press grill with a drain tray.  How is it different?  Push the power button, push the button that corresponds with the type of meat or food you’re cooking (so in this case: beef), then push start.  The grill will preheat and beep to let you know that it’s ready to use.  Open the grill, put in your meat, and close the grill.  You can clearly see from the color cycle where your meat is in the cook process…and it beeps at each doneness interval on the way up.  Perfectly cooked meat every time!  No, they’re not paying me to say this…but if they would like to pay me, I’ll talk about them all the time, HA!

I had some flank steak that I marinated in yogurt and spices…and…YUM.  I served it with small baked potatoes (with a little salt and Kerrygold), sliced Honey Crisp apples, and small slices of raw milk  yogurt cheese.  Oh. My. God. Apples + cheese = cooking WIN.

1.- Salt and pepper flank steak.  In medium bowl, mix yogurt, lemon juice, and all spices.  Place flank steak in a resealable plastic bag and add yogurt.  Seal bag and massage yogurt into meat to coat.  Put in refrigerator for at least an hour, up to two days.

2.- Preheat grill (or skillet) to medium-high heat (side note: if you are using the Optigrill, your choice of meat determines your heat level for you…so your meat type is the only button you push for that process).  Grill meat until desired doneness is reached.  If you’re using the Optigrill, it takes about 90 seconds to reach medium rare…so I’m guessing in a regular skillet, it would take about 90 seconds to 2 minutes per side.

My sister-in-law is generally the instigator of our family’s marathon group text messages.  These text threads start out in one place and end up in an entirely different location…generally with at least one person using shouty caps involving the message “TMI!”  Seriously, we have been known to go from weather to Cosmo in three messages flat.  Anyway, while we were in Florida last week at Disney World (that’s why I haven’t posted lately…picture to follow), some of our family members in Arkansas were deciding what they wanted for dinner, and my SIL was the person to suggest Chicken Divan.  I had totally forgotten how much I used to love it…but it has bread crumbs and like 40 cups of sour cream, mayo, and cheese.  Yes, we eat a primal diet…but the amount of sour cream and cheese in that recipe is our dairy allotment for about six months, HA!

I looked up the recipe for Chicken Divan and started coming up with replacements to jot down for a shopping list.  The only thing that is a bit difficult to replace is the bread crumbs, solely because of their function in the recipe: they hold everything together.  You can add whatever you think might work; however, I just kept it without anything used as a binder.  It basically turned out as a loose casserole.  If I were to add something next time, I would probably add some roughly chopped potatoes (or sweet potatoes if you don’t do white potatoes).  This recipe is pretty forgiving, so add in whatever leftover vegetables you have laying around!  Also, if you omit the cheese, it becomes Whole30 compliant.

1.- Preheat oven to 350.  Salt and pepper both sides of chicken.  Put chicken in stockpot and cover by about an inch with water.  Bring to boil and let simmer for 15-20 minutes (until chicken is cooked through).  Remove chicken from pot and set aside to cool.

2.- Add broccoli and asparagus to the same chicken water.  Cook about 5 minutes and then drain (for those of you playing the home game, that liquid is broth, should you want to save it).  Dice chicken and add to large bowl.  Add in broccoli, asparagus, mushrooms, onions, coconut milk, spices, and cheese.  Mix well.

3.- Pour bowl contents into a 9×13 greased baking dish.  Spread a little extra cheese (if desired) on top and then top with sliced almonds.  Bake 30-40 minutes.  Let cool for 5-10 minutes before serving.

You all know I have a thing for soup.  And not the basic chicken noodle soup–though basic chicken soup has its place in our menu rotation.  I have a thing for soups that have more than four ingredients.  Why?  Because then I very rarely have to make side dishes.  I’m all into one-pot meals because they are generally the easiest things to make with a toddler under foot.  Anyway…this soup is A. Game. Changer.  I don’t say that very often, but this is my favorite soup that I’ve made so far.  Favorite.  And I think if you browse back through the archives, you’ll find at least 10 different types of soup just in the last six months alone.

You can make this Whole30 (and paleo, by proxy) or you can change the coconut milk to heavy cream and make it primal, if you prefer the consistency and taste of cream over coconut milk.  Honestly, there isn’t a huge difference between the cream and the coconut milk, other than the coconut milk gives it a very slightly sweeter taste.  You really don’t taste much of the difference (and the sweetness can be overcome with an extra pinch of salt).

Go check your cabinets and refrigerator–you might have most of this on hand already!  I keep pretty much everything that goes in this soup all the time, other than the shrimp.  Make it, make it, make it!

1 pound shrimp, peeled and deveined (I use smaller shrimp for this soup so there are more pieces)

1.- Cook bacon to crispy and set aside on paper towels to drain.

2.- Heat bacon fat in large pot over medium heat.  When hot, add onions, celery, potatoes, carrots, Old Bay, salt, and pepper.  Cook until onion is soft (5-7 minutes), tossing occasionally to transfer bacon fat onto all of the vegetables.  Stir in broth and bring to a boil.  Reduce heat and simmer until potatoes are almost tender (10-12 minutes).

3.- Add coconut milk, dill, and shrimp.  Bring to a simmer.  Add in Kerrygold and simmer until butter is melted and shrimp are pink.  Serve, garnished with chopped bacon and green onions.

I really wanted to try my hand at stuffed pork chops.  Well, I can say that I’ve tried them.  They were really good, they were just somewhat difficult to maintain correct temperature on each side with a 2 year old dancing around under my feet!  What can I say?  I’m really good at dodging a Psy-Dancing Tiny Person while cooking at the same time.  You can stuff these with just about anything, but for this recipe I chose hot Italian sausage, sweet potatoes, and green onions.  Fantastic flavor combination!  They are relatively quick to make, so it’s a feasible meal on a work night, provided your chops are already thawed.

The hardest part is getting the stuffing in the chop and shoving “enough” into the pocket without it spilling all over.  You can pin it with toothpicks if you want to–I found that I was able to fill it enough without it spilling, only if I cut the inner part of the pocket large enough.  You can basically cut it all the way back to the bone; however, you don’t want the front opening to be the entire width of the chop.  My cut was about two inches at the front and ended about an inch from all sides of the chop.

1.- Preheat oven to 350.  In medium skillet, heat about a Tbsp of your fat-of-choice over medium-high heat.  When hot, cook ground sausage until done, crumbling during the process.  Remove to a paper-towel lined bowl.

2.- Add another Tbsp of fat to the heated skillet.  Reduce heat to medium.  When fat is hot, add sweet potatoes and cook about three minutes (until starting to soften).  Add the apples to the pan and cook another minute or two (until everything is browned).  Remove from pan and add to bowl with sausage.  Stir in green onions and set bowl aside.

3.- Using a small paring knife, cut a pocket into the fatty-pad of each pork chop.  You want the opening two be about two inches and make it as wide as you want on the inside (within an inch of the ends).  Season each side of the chop with salt and pepper.  Scoop  a few spoonfuls of the stuffing mixture into each pocket.  If you want to, you can close the openings with a toothpick.

4.- In large oven-proof skillet, heat 2 Tbsp of fat over medium-high heat.  When hot, add pork chops to the pan, making sure not to crowd them too much.  Cook them for 2-3 minutes on each side.  Add garlic cloves and sage to the pan.  Add lemon juice directly to the pan and move entire skillet to the oven.  Cook another 8-12 minutes.

Let’s get this out of the way: white potatoes are a taboo subject in the paleo family.  If you talk to 100 people who claim a paleo lifestyle, you will get 200 definitions as to what’s included in compliant foods.  We have relaxed our diet a bit to a primal definition so that we can include good cheese (neither of us have problems with dairy in cheese/butter/yogurt form–only in liquid-type milk form…so no milk and no ice cream).  That being said, Whole30 has recently added white potatoes to their list of compliant food.  Do we eat them at every meal?  No.  But we enjoy them in moderation…and sometimes you just need a yummy baked potato!

Like the other night…I had a few potatoes to use before they started growing a gnome village on them.  JR wanted me to make this Mexican beef stuff that I had made for the HOLIDAY PARTY last month.  So I made the beef, baked some potatoes, sauteed a mix of mushrooms, onions, and green peppers, added a dollop of plain yogurt, and made a fajita in a potato–VOILA!  Dinner!

1 C plain yogurt (plus a little more for a topping)

1.- In medium bowl, mix yogurt, garlic, cumin, coriander, chili powder, oregano, and lemon juice until well combined.  Pour into resealable plastic bag with beef, move around to coat, and marinate for 24-36 hours in the refrigerator.  Occasionally turn the bag over so that the yogurt doesn’t settle in one spot for the entire time.

2.- Preheat oven to 425.  Scrub potatoes, dry, pierce them a few times with a fork, and rub them with a thin layer of olive oil.  Sprinkle with salt and place directly on the oven rack.  Cook for 60-80 minutes, depending on how crispy you like the potato skin.

4.- In a large skillet, heat 2 Tbsp fat over medium high heat.  Add beef and cook until desired doneness is reached.  Ours were medium rare at about 3 (or so) minutes per wide-side.

5.- Cut each potato with a cross.  Open up and fill with a scoop of beef, a scoop of vegetables, and a dollop of plain yogurt.  If you feel the need, you can also garnish with green onions, avocado, chopped bacon, and/or salsa.